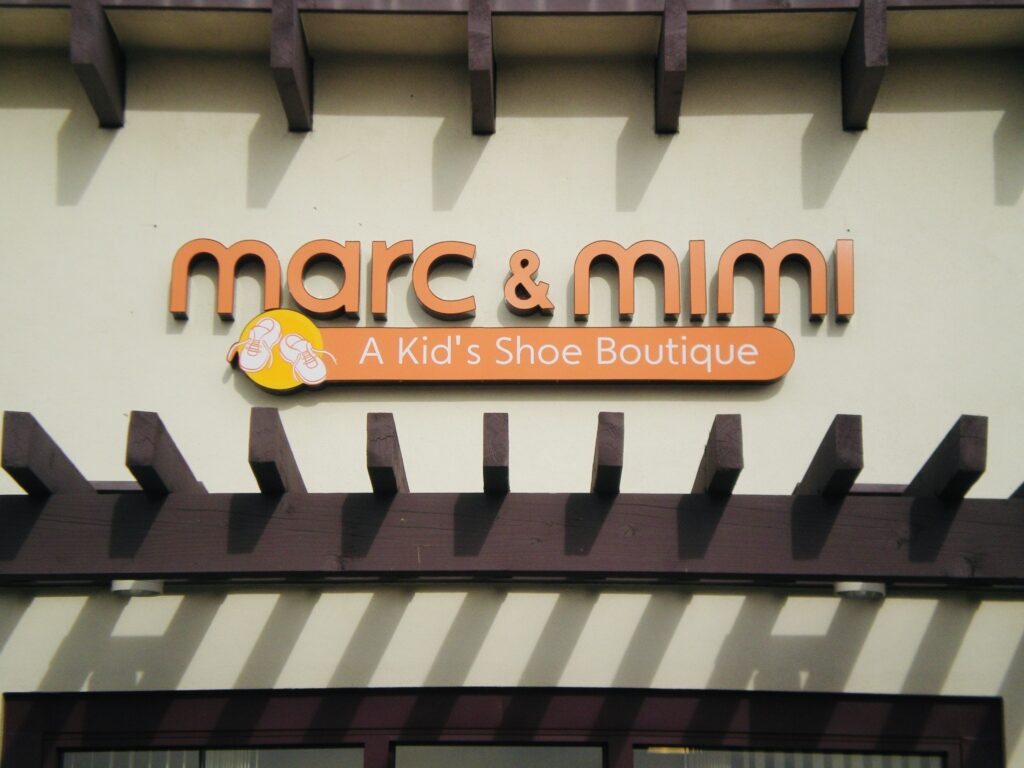 Channel Letters are currently the number one choice of sign identification for business professionals. These electric signs products can be used for internal and external storefronts. Signs Done Fast offers a complete range of channel lettering products, typestyles, colors by paint or vinyl and any custom logos, Front lit are the most common channel letters type. As the name implies, these signs emit illumination only from the front (or face) of the letters. They are often used in both shopping malls and outdoor plazas and channel letters can be either raceway or flush mounted, and can use either neon or LED illumination. We can produce these in many different font and color combinations. Front lit channel letters are also sometimes called “standard” channel letters.

If you aren’t familiar with the zoning or property management restrictions, channel letters need to be permitted before installation. Even if there are no specific restrictions, it’s vital that you understand how your signage fits into the area. For example, flashy colors and billboard size letters may not be appropriate in, say, a historical zone. Signs Done Fast stays up-to-date on the local ordinance and building restrictions and are willing to walk you through the permitting process. For Front Lit channel letter signage, Signs Done Fast offers: Any font style, prefinished aluminum returns, Aluminum backs, Acrylic faces, Trim cap, LED illumination, U.L. Listed We can fabricate nonstandard letters according to your specifications. All of our channel letters / electric signs are U.L. listed, and we use only the highest quality materials along with proven components when assembling your sign. (Please read more on Channel Letters below Gallery)

Introduced in the early 1970’s, Channel Letters quickly gained popularity and continue to be a standard in the signage industry. Channel Letters are typically illuminated, fabricated from metal with translucent acrylic and installed on the exterior of a building.

Originally, Channel Letters were hand-made with color and font limitations. A myriad of industry innovations now allow fabrication to be extremely customizable, efficient and precise. Today, design of Channel Letters has become increasingly imaginative – limited only by building regulations or budget.

There are various factors to consider for Channel Letters such as: type of illumination, mounting method and location of installation on building.

Front-Lit, Standard or Face-Lit: Face of each letter is translucent, so light shines out through the front.

Back-Lit, Reverse or Halo-Lit: Face of each letter is nontransparent, while the Back is translucent– allowing the light to diffuse through the back of the letters instead of the front. Effect looks most pronounced on buildings that are painted a light color.

Combination-Lit: Combined features of Front-Lit and Back-Lit, allowing light to shine both one color from the Face and a different color from the Back of each letter.

A myriad of industry innovations now allow fabrication to be extremely customizable, efficient and precise.

Back: Building-mounted side of Channel Letter. For Front-Lit: A flat sheet of metal is typically cut by router, laser or waterjet. For Back-Lit or Combination-Lit: Typically a translucent acrylic or polycarbonate Back so that the illumination radiates out against the building from behind the letter Face, creating a halo effect.

Returns: Sides of the Channel Letter. Typically formed by a metal strip that fits the Back and Face.

Seam: Returns are welded, flanged and riveted or fastened with wire to the metal Back if Front-Lit or metal Face if Back-Lit to create a solid Channel Letter. At this stage, the letter is ready to be painted.

Light Source: LED is the most common and efficient Light Source, allowing Channel Letters to be thinner. For the best effect, utilize LED colors that match the color of the Face if Front-Lit or compliment your brand if Back-Lit.

Face: Public-facing side of Channel Letter. For Front-Lit: Typically a translucent acrylic or polycarbonate Face so that light radiates outward. Applying black perforated vinyl causes the Face to appear black in the daytime and white when illuminated at night. For Back-Lit: Typically a flat sheet of metal is cut by a router, laser or waterjet.

Trim Cap: Border attaching the edges of acrylic or polycarbonate Face to the Returns for Face-Lit or Combination-Lit Channel Letters. Provides a clean, finished look.

Backer Panel: Potential addition to add a contrasting background color for the Channel Letters while hiding blemishes on the building. Able to contain power supply.

Today, design of Channel Letters has become increasingly imaginative – limited only by building regulations or budget.

Raceway Mount: Landlords may require a Raceway, a metal rectangular box that holds the Power Supply, since it reduces the number of wall penetrations. Raceways are typically painted to match the color of the building.

Wireway Mount: Landlords may require a Wireway – thinner and broader than a Raceway, like a Backer Panel. Wireways require more wall penetrations than a Raceway, but less than Direct Mount. Power Supply is normally housed behind the bulkhead wall.